On March 20th, 1948, to Mr. Doug and Arva Orr, a baby boy was born. Growing up with a Dad who loved the game, the little boy was exposed to the sport that would forever change his life. The little boy was of course, Bobby Orr and the rest, as they say, is history.

He singlehandedly changed the game of hockey as we know it today. Hockey fans across the continent would mark Parry Sound as a pit stop on their summer vacation route just to see the hometown of Bobby Orr. Parry Sound locals were constantly asked questions like “Where does Doug Orr live?” or “Where can we see some of Bobby’s old gear or trophies?” Citizens wanted to help, but had no answer. The only memories of Bobby Orr were in the minds of the community and the few pieces of memorabilia left behind at the community centre that carried his name. Parry Sound needed something, somewhere and somebody.

In the winter of 1996, Mayor Wilf Sabourin contacted George Green, an avid Bobby Orr fan with a reputation for making things happen. Green without hesitation, jumped on board the project. Immediately the wheels started to turn. The first task was to put together a committee of dedicated people who shared the vision and enthusiasm. After developing a strategy and taking a proposal to the community, Doug Orr, Brian Bannerman, Bill Painter, Hugh Bracken, Judy Campbell, Phil Harrison, Jon Green and Gord MacIntyre joined George to form the Bobby Orr Hall of Fame Organizing Committee. Judy Campbell and Jon Green were given the role of co-Chairs.

Under capable leadership, the committee got to work fundraising with events such as the Bobby Orr Celebrity Golf Classic. The tournament was not only profitable economically, but also brought awareness to the project itself.

The initial goal of the committee was to build a stand-alone museum to honour Bobby Orr. Initially the committee looked at renovating the old train station, later known as Station Gallery. They decided it wasn’t a good fit, so they continued to brainstorm.

The team looked into several pieces of real estate but each was missing something. Eventually the committee decided that a brand new building located next to the local Bobby Orr Community Centre, on the Seguin River would be the goal. The Northern Ontario Heritage Fund was the Bobby Orr Hall of Fame Organizing Committee’s best chance at receiving government funding for the project. During the application process, the committee discovered that other organizations were also seeking project funding. Recognizing the importance of all projects to the economic development of Parry Sound, NOHF advisors suggested that the Bobby Orr Museum and the Festival of the Sound’s performing arts centre be put under one roof with the back drop canvas being Georgian Bay. 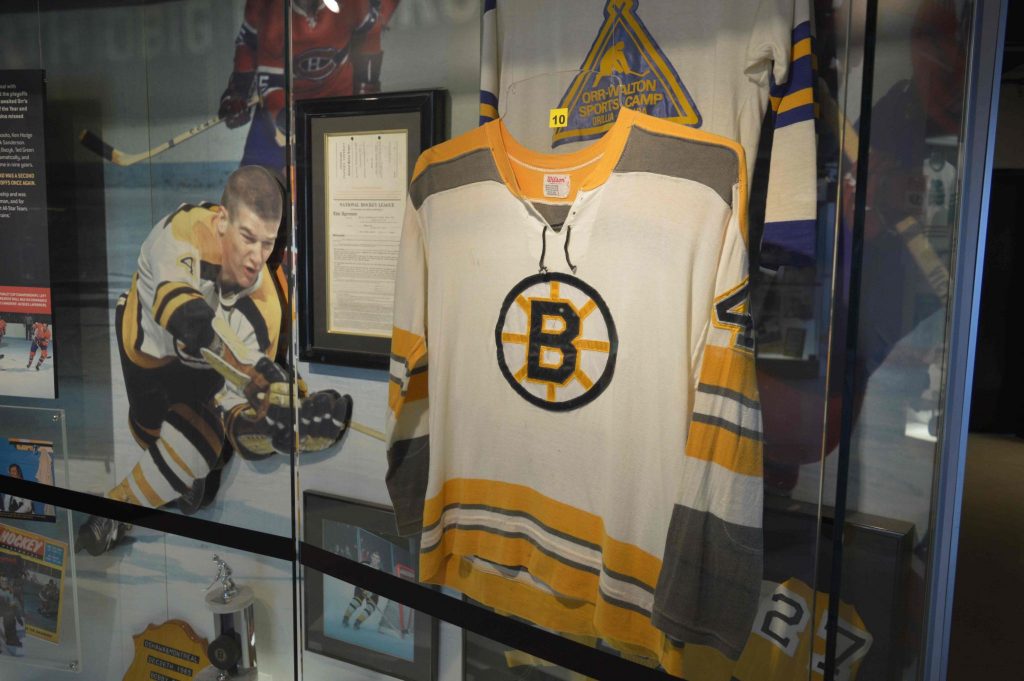 Being contained in the same building not only made financial sense, but also gave the Hall of Fame the opportunity to nestle itself on the shore line of Georgian Bay. The unique location of the BOHF, was circumstantial, but today, contributes to the overall elegance, charm and functionality associated with the facility.

Word quickly got out in the community that a home for the treasured artifacts was finally being built and long time friends, family and Orr fans began to donate their cherished memorabilia. As the collection began to accumulate, the community spirit and enthusiasm generated.

A group of historically-minded sports fans tackled the task of organizing and cataloging hundreds of artifacts, photographs, newspaper clippings, hockey jerseys and sports memorabilia. This difficult chore was made easier by the support of the staff at The Hockey Hall of Fame in Toronto. These generous people were more than happy to lend their experience and guidance to the organizing committee.

With Bobby Orr on board throughout the project, his insistence that the Bobby Orr Hall of Fame celebrated all contribution to sport in Parry Sound was a priority.

To this end, and after attending an Induction event in Saskatchewan, Ray Pavlove and a team of committed individuals started the path to The Bobby Orr Hall of Fame Inductions

The Bobby Orr Hall of Fame Induction has become one of the community’s most treasured events and certainly a favourite of Bobby Orr, himself.

To date 39 individual and 3 team banners hang alongside Bobby Orr’s banner reflecting their own excellence and contribution to sport in Parry Sound.

The Bobby Orr Hall of Fame welcomes over 5000 visitors per year who come to share the history and their own memories of the greatest defenseman of all time.