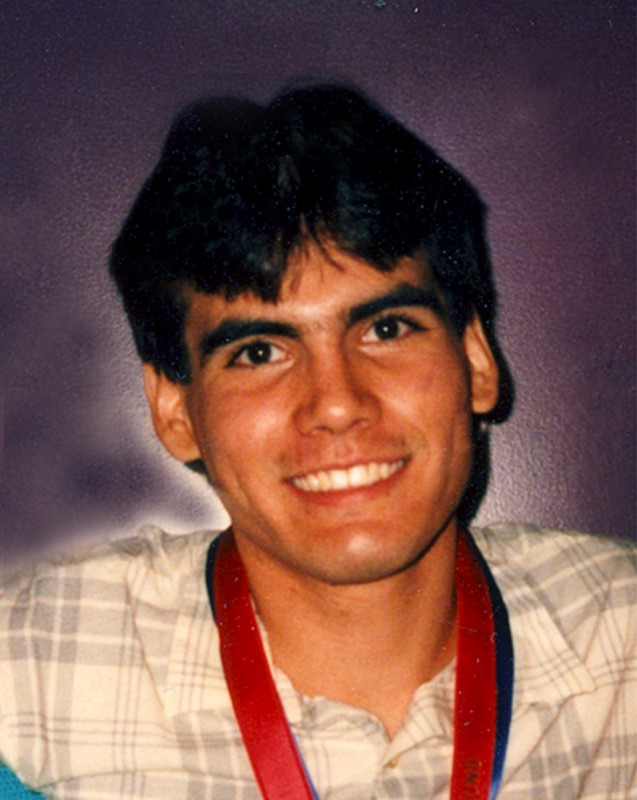 Robert Lesley Rice grew up on Wasauksing First Nation, Parry Island. With the encouragement and example set by his brother John, Bob, as a child, took an interest in running.

As a Grade 6 Student at William Beatty School, he entered his first cross country competition, The Nobel Road Race, placing a respectable third. He had little difficulty winning it the following two years, outdistancing the competition by quite a margin.

Bob qualified for theAll-0ntario Track & Field Championships as a grade nine student, the first grade 9 student to do so in more than a decade.  He set records along the way.  In Grade 10 as a Jr., he placed first at the Laurentian University
and York University Cross Country Championships. Bob’s early high school performances clearly put him on the radar screen, quickly gaining national attention. In order to compete in non high school meets he joined the Scarborough Optimist Track Club, and then moved to the North Bay Legion Track Club which was closer to home. He specialized in the 2000m Steeplechase, the 3000m and in cross country running.

Parry Sound High School Coach John Harper and Coach Denis Landry, of the North Bay Legion Track Club, recognized Bob’s talent and provided him with the opportunities to compete. Bob began to tour Canada. He finished third at the Cross Country Junior Championships in Sherbrooke Quebec and qualified for the National team. After a second place finish in the Canadian Track & Field Championship in Victoria, he was invited to join the national team to represent Canada at the 1983 World Jr. Championship in Gateshead, England. The Parry Sound Community gave Bob a rousing send off to his first World Championship.

He was made an Honourary Citizen, roasted and showered with gifts. He received a standing ovation from his classmates at PSHS. Bob did not disappoint, he placed second on the Canadian Team and finished an amazing 24th in a field of over 100 of the world’s best cross country runners. Premier Bill Davis honoured Bob as an inspiration not only to his community but to the rest of the province.

In 1984, at the Canadian Track & Field Jr. Championship in Victoria, Bob finished first in the Jr. Cross Country and qualified to represent Canada in the World Jr. Championship held in Meadowlands, New Jersey. In a field representing 130 countries and the world’s best Jr. Runners, he came in with a remarkable 9th place finish. At the prestigious Keebler Prep Invitational Meet in Chicago, he finished first in his first ever 3000m Steeplechase, setting a new course record undercutting the track record by five seconds. In 1984 Bob turned Sr. and faced much stiffer competition and was forced to develop a powerful closing “Kick” which became his hallmark.

He placed 3rd in the All Canadian Team Cross Country in Sudbury, 2nd at the Canadian Sr. Cross Country in New Brunswick, followed by a 4th place finish at the Canadian Track & Field Championships in Winnipeg. Also in 1984, at the Canadian Track & Field Association Jr. Championships in Edmonton he finished first in the 2000m Steeplechase and second in the 5000 m and qualified to represent Canada in the Pan -Am Jr. Championships in Nassau Bahamas where he placed 3rd in Steeplechase and third in the 5000 m.  This was followed by a 1st place finish in the 3000m Steeplechase in Miami, Florida. In his final year of high school he once again placed 1st in the Laurentian University, cross country championship. Later he set a record at the York University Invitational, and then competed the following day in the London Spring Bank International, finishing second. In his last three years of high school he won an amazing 62 races. On 12 separate occasions he won three grueling distance events on the same day.

Bob was an enormously talented runner with a fierce determination. He shattered records and in fact in virtually all races the only person he had to run against was himself. No Parry Sound High School athlete has ever scaled heights as quickly or as spectacularly as Bob Rice. Unassuming and dedicated, he possessed a fluid running magic that was a source of admiration. He won PSHS athletic Awards for Achievement and improvement.

He rewrote the PSHS record book a total of 14 times. Bob credits PSHS Coach John Harper and his national Coach Denis Landry for providing an innovative training program necessary for his success. He believes they were “ahead of their time”.

NIKE also recognized Bob’s potential greatness and provided him with shoes and equipment. Bob and teammate Graham Fell, the only Canadians who were asked by NIKE, to experiment with a prototype Steeplechase shoe which would allow water to disperse from inside the shoe when used in wet conditions. In his final year of high school Bob received the rare and coveted rating from Sports Canada.

When Bob graduated from high school he ignored U.S. track scholarships and instead chose to attend the University of Ottawa where Landry was on staff. Landry clearly remembers Bob, “In his first year of university he was able to win the Canadian inter university cross country championship. Bob bettered the other top two athletes in the event. McCoy from Memorial University, Newfoundland had been the winner in the previous four events and here was Bob essentially a rookie coming up to keep him from winning his fifth and record setting title, so that was certainly an indication of his depth of ability,” commented Landry. “It was a stunning upset. The University of Ottawa, with Bob, John Halvorson, Alain Boucher and Richard Charette, dominated the Canadian Track & Field scene, capturing the CIAU, the Ontario Universities Athletic Association Championship and the Ontario Track & Field Championship. In the summer of 1986 Bob’s 2nd place finish in the 3000m Steeplechase in the Canadian Track & Field Championships and Commonwealth Games trials earned him a spot on the Canadian Team to compete in the Commonwealth Games, Edinburgh Scotland.
He was the youngest member on the Canadian Commonwealth Team. In spite of stomach flu prior to the race he finished as very respectable 12th place.

In December, 1986, his second year at the University of Ottawa, tragedy stuck. Bob was putting something in the trunk of his car when another car slid into him, damaging his legs. A promising career abruptly ended for the 20 year old track & field star from Wasauksing First Nation. Try as he might, he was unable to rehabilitate. His brief but meteoric career was cut short before he reached his prime.

In his 6 year career he ran over 129 races, winning 79, medalling in 102, and breaking 43 track records. Many are firmly convinced that without his unfortunate accident he would have achieved fame to rival Canada’s famed Tom Longboat and would have represented Canada in the 1988 Seoul Olympics.

Today, Bob is Executive Director of Ningwakwe Learning Press, an organization which develops, publishes and distributes learning materials that contribute to a holistic approach to achieving Native literacy learning outcomes.

Bob Rice is an excellent role model, who in spite of his tragic accident, perseveres. The same remarkable dedication he gave to running, he now gives to his children Jenebugh-Rose and Owen and to improving literacy in Native communities.

His outstanding achievements and humble manner are an inspiration to others and serve as a distinguished legacy which is honoured as he takes his place in the Bobby Orr Hall of Fame.

Meegwetch Bob, you have brought pride and dignity to your family and your community.