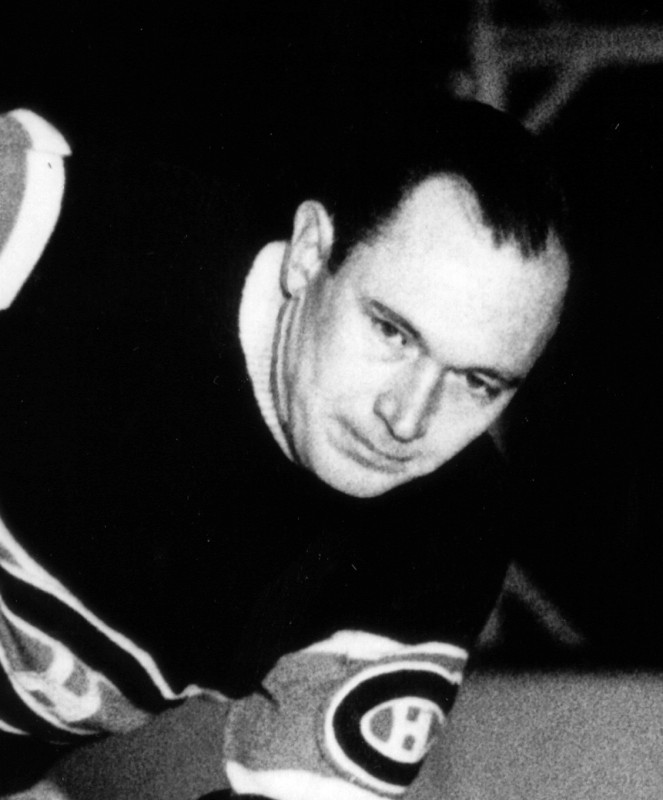 Gerald “Stub” Carson was born in Parry Sound on October 10, 1903, at 33 Church Street the last of six children of Donald and Elizabeth Carson. He began playing hockey with his brothers Frank and Leslie on Georgian Bay and the Seguin River, quickly developing his skating skills.

He attended Central School, Parry Sound before going to high school at Woodstock Boys College. In 1921 he played hockey for the Woodstock Athletics in the OHA Jr. League, the same team his brothers Frank and Bill and Norman Shay, another Parry Sounder played for in 1918. Gerald, like his older brothers Bill and Frank had a real desire to play hockey. All were very athletic and known for their great skating skill and determination.

All three Carson brothers left their mark on the Woodstock Hockey Team before moving on. Gerald and Bill Carson went to play for the Grimsby Peach Kings in the OHA Sr. League in 1923-24. Gerald remained with the Peach Kings, from 1923 to 1927, while brothers Bill and Frank played for the Stratford Indians. In 1925, the then famous Grimsby Peach Kings won their first OHA Intermediate Championship defeating the highly favoured Soo Greyhounds. It is interesting to note that the Peach Kings had only eight players, one goalkeeper, five forwards and two defensemen. Gerald Carson was one of the defensemen. No players complained of lack of playing time.

After his last year with the Peach Kings; Carson turned pro in 1927-28 with the Philadelphia Arrows of the Can- Am League. In 1928-29, his first year in the NHL, he played with the Montreal Canadiens. He was loaned to the New York Rangers for part of that season before returning to the Canadiens for the 1929-30 season. A rugged defenseman, he had the distinction of playing his first season in the NHL without registering a single point and served only nine minutes in the penalty box.

The Canadiens won their Second Stanley Cup in 1929-30 with Carson playing a significant role on defense. It was Gerald Carson’s first and only Stanley Cup. In recognition of this achievement all players were given a gold watch. The watch remained in the family and was handed down to a very young Jim Carson, Gerald’s nephew, who did not recognize its value and broke it while working on the family farm. Carson was back in the Can-Am league with the Providence Reds for the next three seasons before returning to the Montreal Canadiens for four full seasons, playing his last game with the Canadiens in 1935. His career was interrupted when he suffered a serious off-season knee injury and missed all of the 1935-36 seasons. He returned for one more year of professional hockey in the NHL, when the Montreal Canadiens traded him in 1936-37 to the cross-town rivals, the Montreal Maroons.

Gerald Carson played a total of 261 NHL games scoring 12 goals and 11 assists. He played 22 playoff games with no points. He was a tower of strength on the ice and if necessary would hit his opponents hard, but cleanly. He acquired only 205 penalty minutes in his NHL career. He never cared who scored the goals. Preventing the opposition from scoring and feeding the puck to the slick, stick handling forwards was his job on defense. Just as long as they scored, he was satisfied. He would, on occasion, zoom down the ice, leaving everyone on the opposing team behind him and if a goal wasn’t scored, would return to his own end just as quickly.

He retired from professional hockey after the 1936-37 season. Gerald Carson returned to Grimsby each summer during his playing career and worked as a salesman for Dow Brewing Company. When he retired from professional hockey he made Grimsby his permanent home and continued to work for Dow. His business life was the same as his professional hockey career. He was hard working, and a proud representative of his firm. He was loyal, honest and fair with his customers. Back-handed, under-the-table-methods were not part of Gerald Carson’s dealing with people. It is not hard to understand his success in the business world and on the ice. His untimely death in 1956 at 53 years of age shocked the Grimsby community.

Together the Carson Brothers’ story is a remarkable one in the hockey history of Canada.

Gerald, as the final Carson brother to be inducted into the Bobby Orr Hall of Fame, joins his brother Bill who was a 2003 inductee and brother Frank a 2004 inductee. All three Carsons grew up in Parry Sound, played in the NHL and all won Stanley Cups with different teams; Frank with the Montreal Maroons in 1925-26; Bill with the Boston Bruins in 1928-29 and Gerald in 1929-30 with the Montreal Canadiens.

The legacy of Gerald Carson, like his brothers, provides wonderful memories of a sport where little or no headgear was worn, where skates and equipment were rudimentary, where lavish contracts didn’t exist and where true talent was clearly evident on the ice.

Gerald Carson’s outstanding achievements and remarkable accomplishments are to be celebrated as he takes his rightful place as an inductee in the Bobby Orr Hall of Fame. It is an honour he richly deserves.

Career
Loaned to New York Rangers by Montreal for remainder of 1928-29 season, February 15, 1929. Traded to Providence (Can-Am) by Montreal with cash and the loan of Jean Pusie for Johnny Gagnon, October 21, 1930.
Missed entire 1935-36 season recovering from knee surgery, September, 1935. Traded to Montreal. Maroons by Montreal for the rights to George Brown, October 7, 1936.

Notes
Brother of Bill and Frank.